Over the last couple of weeks we've had some great progress at Kumeu Observatory, firstly Jonathan Green managed to get hold of the electrician and get the power restored, then with a stroke of luck on our side we had a decent run of clear weather around full Moon, so taking advantage of the clear weather Jonathan Green and Steve Hennerley managed to get the new QHY 168c Cold CMOS camera which is on loan from Astronz installed and in focus which was a bit of a mission, Steve had to 3d print a spacer to get enough back focus but we got there in the end. 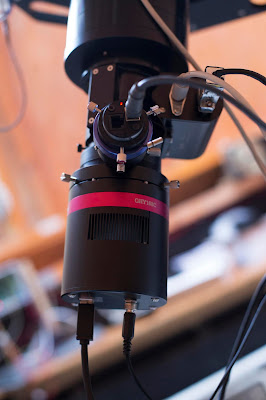 <- The new QHY 168C Cold CMOS camera with a QHY 5 II offset autoguider currently on loan to Kumeu Observatory thanks to Astonz.

On one of the days Jonathan met up with Steve out at Kumeu he took a look into the neighbouring Wasp Observatory after all the storms we have had out at Kumeu, Auckland Astronomical Society member Nicola Gujer had asked him to check up on her gear in the observatory. On opening the door to the observatory Jonathan was confronted by a rather large rat! After scaring off the rat, Jonathan had a chance to inspect the observatory, unfortunately the observatory was in quite a state with rat excrement everywhere and a strong smell of rat urine. So after heading home Jonathan sent David Moorhouse an e-mail advising him of the situation at the Wasp, after talking on the phone David and Jonathan met up out at the Wasp on the weekend and thoroughly cleaned and disinfected the entire observatory, after this task was completed Jonathan had a chance to talk with David about the future of the Wasp Observatory, David indicated that he had no plans to come back to Astronomy and indicated that he wished to sell his equipment, so now the Auckland Astronomical Society council will discuss the potential purchase of Davids equipment at the next council meeting, hopefully we can come to an agreement to buy Davids equipment and get the observatory back into regular operation. 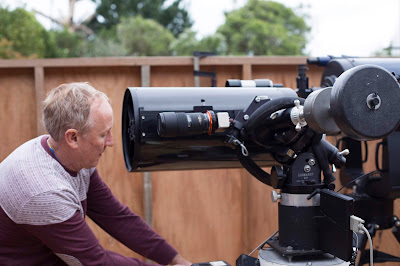 <- David Moorhouse inspects his equipment after cleaning up the rat infestation. 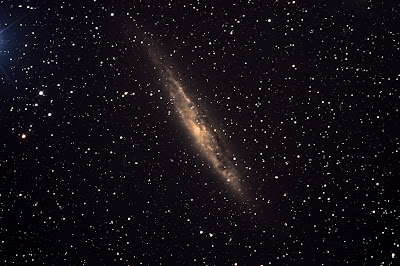 <- NGC 4945 captured from Kumeu Observatory, please note the collimation of the telescope had not been refined at this stage, although preliminary tests were encouraging to say the least. 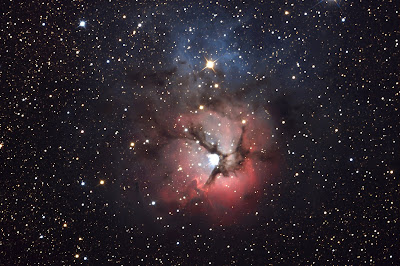 The Trifid Nebula captured from Kumeu Observatory on the 8th of June, please note the collimation of the telescope had not been refined at this stage. -> 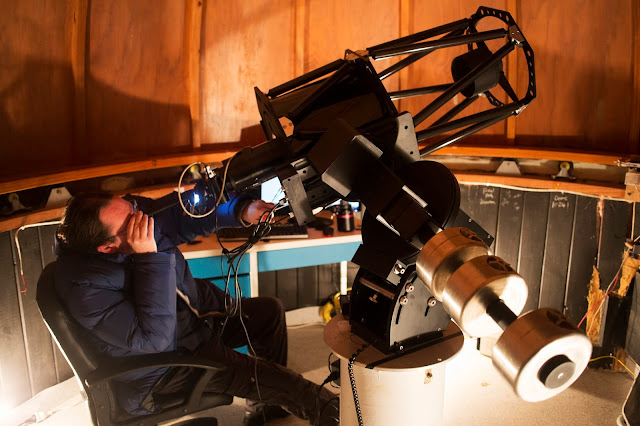 ^ And finally on Thursday the 14th of June Steve Hennerley met up with Jonathan Green to work on refining the collimation of the 12' Astronz (GSO) Ritchey–Chrétien telescope, unfortunately the sky had clouded over by the time we were happy with the preliminary collimation, so we still need to put the telescope on a star and see if we will need to make any final adjustments. The weather has been quite frustrating since last Thursday but hopefully we get another clear patch soon, so we can continue the great progress that has been made so far.

Posted by Unknown at 1:38 PM No comments:

Sorry for the lack of updates, it turns out that the Ritchey–Chrétien telescope we installed had faulty optics so we ended up replacing that with another mirror cell that seems to be fine, we have also had a couple of nasty storms in Auckland recently, the first storm knocked the power off when a tree fell over the power cable that connects the observatory to the power grid and the second one damaged the shutter of the dome, the observatories neighbour Peter McLeod repaired the shutter quickly and for free which was very much appreciated by the Auckland Astronomical Society council, Peter has now also repaired the Dome from the rotting skirting and the mold and moss growing on the dome exterior the dome also has a nice new shiny paint job now. 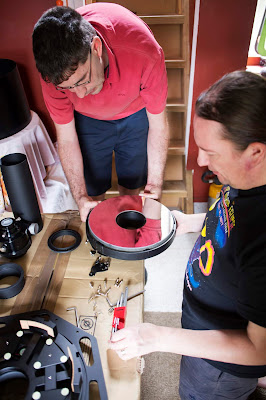 <- Steve Hennerley and Andrew Buckingham replacing the faulty optics in the Ritchey–Chrétien telescope.
Moving forward we are looking to get the power restored then testing out the new optics with a new QHY ColdCMOS camera on loan from Astronz, hopefully we should be back in action soon. 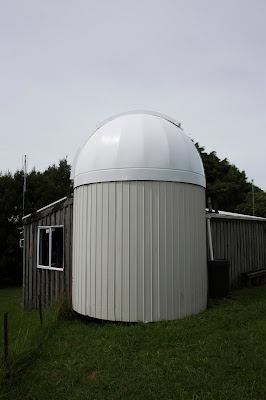 <- Despite all the setbacks the one really positive thing that has been accomplished this year is the repair and restoration of the Kumeu Observatory dome, Peter McLeod did an exemplary job.
Posted by Jonathan Green

Sorry for the lack of updates recently, we had an extended microlensing season this year, our last microlensing target for the year was in Taurus and we took observations of that target throughout November, December and early January, we encountered all the usual challenges with frosting on the chip causing some frustration and missed nights, also during November we had a broken computer network so observations had to be taken using the computer in the dome which is never ideal, the target in Taurus was also fairly low in the sky for us, so not sure if our observations will be useful or not, although Subo Dong told me he was giving our data to his student to work on so we can only hope he can extract some useful data out of it and that Kumeu Observatory will get a mention in any papers written, we did have a pretty good run of weather during November and December so we managed to monitor the target with a daily cadence on almost every available clear night, including a lovely clear Christmas morning.

January hasn't been as good weather wise so far, it's been very hot with temperatures in the 18-20 degree range at night, our SBIG CCD can't cool down to -20 in these conditions, also means that the mosquito population has exploded so we either sweat it out inside the observatory or get eaten alive outside, work on the repairs to the dome have commenced with Peter constructing some scaffolding on the outside of the observatory, we also had an issue with the shutter when the elastic guide rope snapped one night when Jonathan Green was opening up giving him a fright. 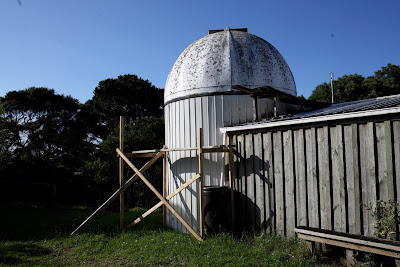 <- The Dome scaffolding in place ready for the repair work.


Now that the microlensing observing campaign has finished, Jonathan Green, Steve Hennerley and Andrew Buckingham headed out in the daytime to take off the "Nustrini" C14 Schmidt-Cassegrain telescope and replaced it with a Astronz GSO 12' Ritchey–Chrétien telescope, we are going to have to find an adapter for the Optec Temperature Compensating Focuser and we will have to spend a few clear nights working to get everything setup and operational again, if the tests from the new optical tube are positive we may ask the council to purchase either a 14' or a 16' Ritchey–Chrétien telescope for the observatory as the "Nustrini" is really getting quite old now and is due for retirement. 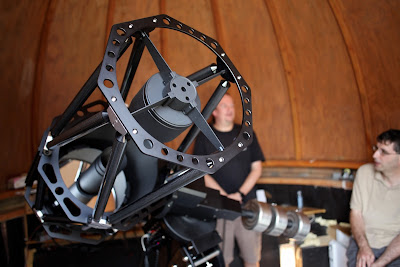 We also repaired the elastic guide rope for the shutter and replaced the last two old filters in the filter wheel of the SBIG CCD camera so we now have an all new LRGB set as well as a new Wratten 12 filter, with the councils consent Jonathan Green and Steve Hennerley also removed the bunk beds downstairs to make more room for an observation workstation, we are very happy to have done this as on removal we found Rat feces and urine marks in both beds and really those beds were a health hazard, there is also evidence that Rats have been getting into the roof of the observatory but with a pig farm on one side and a macadamia nut farm on the other we are probably always going to have a rodent problem, all we can do is set rat baits and hope to control the problem as best we can. <- The downstairs room with bunk beds removed, plenty of space now for an observation workstation to be installed

So we still have plenty to do out at Kumeu, Andrew Buckingham also has a QHY ColdCMOS camera for us to try out although it's yet to arrive in New Zealand, we will need to work on the RC's collimation, do another pointing model, take flats, work out our pixel scale, field of view etc etc so plenty to keep us busy over the coming months, bring on the clear skies!

Posted by Unknown at 2:00 PM No comments: