Since the last night imaging at Kumeu, we have had a run of some really bad weather, on Sunday the 9th after attending Neil deGrasse Tyson at Spark Arena I headed out to the observatory in the hope of clear skies but even with other parts of Auckland clear Kumeu was still under a pretty constant blanket of clouds, after waiting I drove home to find Coatesville clear but you could still see major clouds in the West. On Monday the 10th after attending the Auckland Astronomical Society meeting I headed out again in the hope of clear skies but it was raining on arrival so I attempted to wait out the clouds and rain by occupying myself with cleaning up the observatory but with no luck it was still heavy cloud when I left around midnight, I'm happy to report we have submitted all our current data to MicroFUN so all we need now is some clear sky to get back to work although fortunately there has been no new microlensing alerts in the meantime. 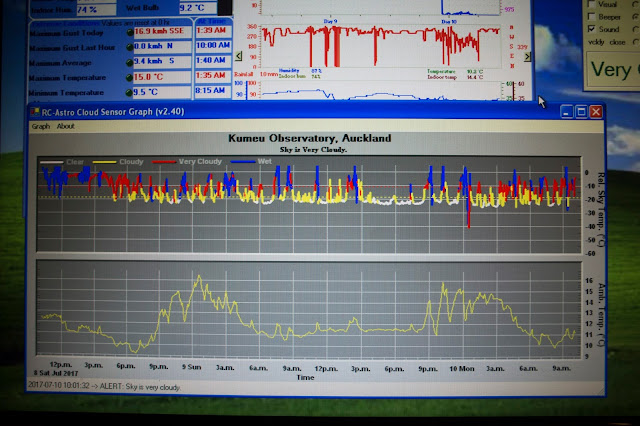 ^ As you can see from this image of the cloud sensor graph clear patches have been few and far between, it's been frustrating because other parts of Auckland have looked relatively clear.

Posted by Jonathan Green
Posted by Unknown at 4:03 PM