A Night of Two Halves

On Monday the 3rd of July, Jonathan Green decided to miss going to the Auckland Astronomical society meeting and head out to Kumeu instead, after a weekend of rain and clouds it looked like things were finally clearing up, after arriving around 6:15pm he opened up the dome setup and got a focus of a FWHM of 1.7 arc seconds per pixel ( not bad for having only just opened the dome ), he then got onto taking the normalisation data that we need to submit our latest microlensing data sets, so he started by imaging Ogle-Bulge-2017-1161, which was the priority target, he managed almost three hours worth of data before hitting the hard stop before the meridian crossing, this was the first time he had let the mount hit the hard stop, it made a beeping sound and he found when he tried to send it home that somehow the computer had lost communication with the mount.

Fortunately it was precisely at this moment that Steve Hennerley turned up, we resolved the issue with the mount and a few other issues we were having before getting back onto our target, we finished imaging Ogle-Bulge-2017-1161 after collecting three hours worth of data so hopefully that will be enough for normalisation, Steve headed home around 1 am and Jonathan stayed behind to continue imaging, he got started on the Ogle-Bulge-2017-1135 target, the first half an hour was plain sailing but the next 8 300 second images he took, took Jonathan until just after 3 am to grab, that was because we had big clouds coming in, he had to close the dome a few times out of fear of a downpour, the wind had also picked up by this stage so he could only grab one or two images in the brief gaps, after 3 am the situation deteriorated so he packed up and headed home around 3:40 am, so we only ended up getting just over an hours worth of normalisation data on the Ogle-Bulge-2017-1135 target so I'm not sure if that will be enough, after Jonathan made it home he sent all the calibrated image data to Steve Hennerley via the We-Transfer file transfer service to be prepared for submission to MicroFUN.

Obviously there has been a lot of rain over the weekend and things are starting to get a bit more muddy outside the observatory, it was really wet on the night as well with the humidity at a 93% level, Jonathan was very happy to see that at the end of the night we didn't have any sign of dew on our corrector plate so he thinks that the dew shield has proven to be the only thing we really need to keep the dew off, this is just as well because when you have to run the dew strap heater this adversely effects the images. 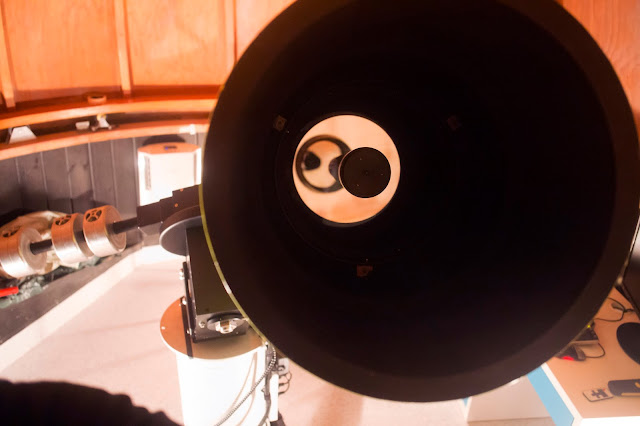 ^Looking down the dew shield at a clean corrector plate after a nights observing in 93% humidity, note also how well baffled the dew shield is, David Moorhouse really did a fantastic job constructing this dew shield!