Last night was the 1st good night in a while so Jonathan Green and Shaun Fletcher headed out to Kumeu so Shaun could get some practice in, unfortunately we had an issue with the Optec TCF focuser, basically it would start the auto-focus run take one or two images and then just inexplicably stop, also at times it would try to move the focus to some crazy step number size like around the 200,000 mark when the maximum step size is of course just 7,000, I was at a loss to explain this strange behaviour as no settings have been changed in the downtime between clear skies and it was working perfectly fine the last time I was out there, so we tried shutting everything down a number of times to see if maybe we had done something wrong in the setup procedure but nothing seemed to work and we were hit with the same problem every time we got to the auto-focus process, thankfully we have an Auckland Astronomical Society council meeting tonight so I'll be able to ask Grant Christie about the problem and see if it can be resolved, I'm sure it must be something simple that is just eluding me at the moment.

Last night we also had a few visitors to the Observatory we had a local Kumeu astrophotographer who is just 16 years old come and take a small tour of the Observatory with his Dad, we encouraged them to join the society and to visit Stardome where they will be able to actually "look" through a telescope, we also had two society members use the observatory grounds as a dark site to do some deep sky astrophotography from, so it was a busy night out at the observatory indeed! Even though it was really a very frustrating night for myself. 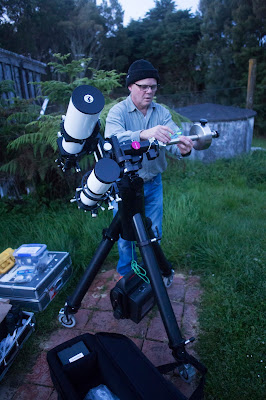 Posted by Jonathan Green
Posted by Unknown at 2:05 PM