Jonathan Green, got out to Kumeu Observatory last week in an attempt to resolve the focus issues he reported last time he and Shaun Fletcher were out there, after consulting Grant Christie about the issue he came armed with some new settings to try, once he had inputted the new settings the TCF auto-focus worked and the camera didn't stop anymore although he still couldn't run through a v-curve due to not having enough steps to get through, in other words the auto-focus was hitting the step number 1 before completing the v-curve, so knowing that the solution for that is to set the TCF back to 3500 which is the halfway point and then manually focus the telescope until it's back to near focus, once that was completed getting the v-curve was simple and getting a decent focus was not a problem.

Of course to manually focus the telescope he had to un-lock the primary mirror so we will probably need to re-collimate the telescope, also by moving the mirror this has also shifted the T-Point model so we will need to do another pointing model as well, knowing that we also need to take the camera off the telescope to remove the old Wratten and luminance filters and replace them with the new filters provided to us from Astronz Jonathan decided to not attempt another T-Point model until the new filters had been installed, of course there was also plenty of clouds around on the night that also influenced his decision to not attempt a new pointing model as well.

Unfortunately Jonathan discovered a new issue on the night with our computer network, the computer downstairs won't communicate with the dome PC anymore or go online, so we can't currently check the cloud sensor online at the moment, Steve Hennerley is back from overseas now so after having a chat with him over the phone we diagnosed the problem and Steve is going to purchase the replacement parts to get the network back up and running.

Now that Steve is back in New Zealand we are going to spend some time this Spring / Summer really optimizing all our systems at the observatory including our Polar Alignment, the tracking speed of the mount, collimation and a few other jobs that we were putting off while the microlensing season was still underway, we also have been granted a budget from the council of the Auckland Astronomical Society to employ our observatory neighbour Peter McLeod to undertake repairs to the dome's base ring and skirting as well as cleaning and re-painting the dome, we get our mains power from Peters house so it's great that we have someone so close to us that is prepared to undertake all the work that needs to be done to restore the observatory to it's former glory, again a huge debt of thanks is owed to Steve Calveley for suggesting to us that Peter could do all the work that was needed and of course for letting us operate the Kumeu Observatory on his land. 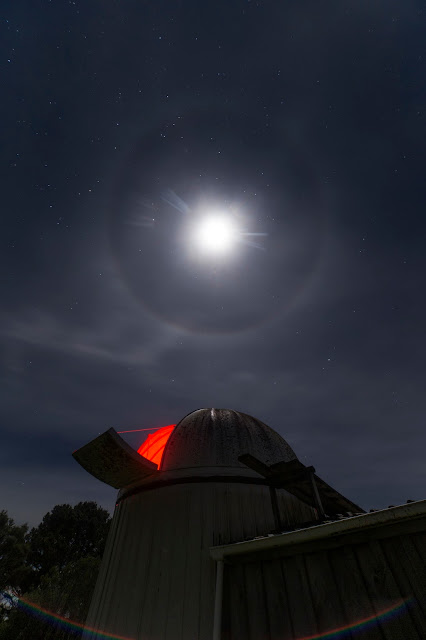 <- As you can see from this photo of a Moon halo above the Kumeu Observatory, the dome is really in dire need of a good clean and re-paint!